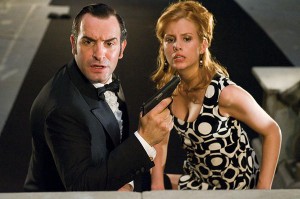 It is a parody of the  spy film  genre. This film is a sequel to the 2006 film OSS 117: Cairo, Nest of Spies.
Synopsis
Hubert Bonisseur de la Bath, aka OSS 117, is the French spy considered by his superiors to be the best in the business. The year is 1967 – he’s been sent on a mission to Rio de Janeiro, to find a former high-ranking Nazi who went into exile in South America after the war. His eventful investigation takes him all across Brazil, accompanied by a charming Mossad agent who is also looking for the Nazi. The man is charming, and so is the young woman. Set to the strains of bossa nova, their tale is by turns an adventure and a love story.

Watch the trailer of the film