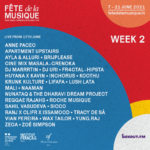 Music expresses that which cannot be said, and on which, it is impossible to be silent. -Victor HUGO For France, since 1982, June the 21st is not just the summer solstice but also the day to savour music in all its forms – La Fête de la Musique . For 39 years, Fête de la Musique has been a confluence ... END_OF_DOCUMENT_TOKEN_TO_BE_REPLACED

Alliance Française of Hyderabad has a long history of its own. The connection between France, the city and its adjoining areas goes few centuries back and it is growing strong. Thanks to its welcoming, competent and dedicated team, it also has a bright future.