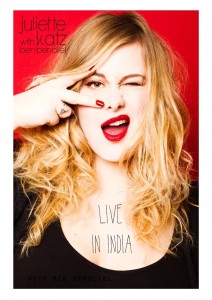 “I was born with music, grew up with music and I have never wanted anything else.” At least, it’s clear. From the age of four, Juliette Katz wants to be a singer. But it is not because daddy had been “in the field” for years that the path has been straight. Rather, she took detours and took her own time before releasing her first album.

We see today Juliette Katz, a young lady, romantic and cash, emotional and deep. Indeed plump, but capable of beautiful ferocities. With her diva soul slightly hoarse voice, she carries herself in pop and songs with the same mixture of ease, commitment, confidence and innocence.  Even before learning to read, she dreams of glamour and choreos in front of the T.V.

By the age of seven, she has a crush for Georges Brassens.  “Then the desire then definitely grows. I wanted to be on screen, to share, wanted a language that speaks to people without any barrier of language or style. I wanted people to listen, to watch and to respect me.” She gets passionate about Portishead, Massive Attack, Emiliana Torrini,Sia,Rage Against The Machine… But she recognises herself as “Pauline Croze’s groupie”.Her melodies are outstanding, her voice is amazing.I find her real. Her voice really inspires me a lot”.

Juliette was not made for school. She’d liked to live in India for one year, go to school bare foot and live without electricity. After getting back to France, she fails twice, turns towards a music school, and gives her first concerts in Pondicherry(and in French) when she comes back to India, composes her first original album that impresses Alain Souchon– “He spoke about me in his recording studio but I was not ready”.On a whim, she goes to Russia to join a friend : “ He is Russian and a guitarist. He organized a tour hastily: we did fifteen concerts in French in three weeks. Awesome experience”. By chance, she enters the fashion industry and becomes one of the most commonly seen “chubby” girl in magazines.  “I could have become a brand ambassador but I did not wanted to convey the image of a chubby girl who assumes herself, etc, etc.. Even though that’s who I am- A chubby girl who assumes herself!”

She obviously searches for herself. And, she finds herself.  She starts writing with Benedict Abt, whom she met in an artists’ residence. And she introduces her to Helene Guyon, an editor in advertising…and who is almost forty years elder than Juliette. “It immediately clicked between us. She brings to her texts a touch of maturity that I look for, so that it doesn’t portray a “teen” side-which I am no more. We also worked with Stephanie Petrequin, by writing from our conversations, about my likes and dislikes. And we only kept was what I really felt and lived…”

Because she is not trying to hide, behind her golden hair and twenty-two years,  a deep character of an artist who already knows what she wants. When she records a part of the album in New York with Scott Jacoby (Ayo or John Legend’s producer especially), he is amazed : she attends all the shows, including the tedious tuning of drum and percussion samples-“He told me that none of the singers do this.”

The American singer and producer is not the only one who talks about Juliette Katz’s first album. Many songs have been produced in Paris by Marlon B (Adrienne Pauly, Sinclir), organized by the master Albin de la Simone or composed by Mike Ibrahim. Just like she did with Scott Jacoby, Juliette Katz has co-composed, looked and listened to every bit, always with the desire that her songs should resemble her.

She proceeded the same way when she composed two songs with Bardi Johannsson (Bang Gang,Lady&Bird), by exchanging ideas so that everything suits her, that all the album titles really belong to her.

One of these songs Vague à l’âme, is a duet with Sia, each of the singer expressing herself in her own language and words.”I did not even expect such a thing. Anyway, it seemed absolutely impossible to me. Sia liked the song. So she started writing her lyrics with a tune that suited her, that was included in the original track. And while listening to it, it seems totally obvious. What an artistic venture…”

When she composes, when she writes, when she sings, Juliette Katz makes sure she portrays herself how she really is, in between two burning extremes simultaneously-feelings and honesty. She wanted her album that way, “ consistent although diversified, with pop songs, rock songs, soul songs and soothing songs…” Undoubtedly, this album resembles her. Does she have a plan? “I don’t have a strategy. I always took one day at a time. Unfortunately. Or fortunately.”

FREE INVITATIONS WILL BE AVAILABLE SOON!!!