Alliance Française Hyderabad invites you to the concert of Alexandre Jurain, esraj player and Sukanta, a Bengali singer, on Friday February 14th at Dhi Artspace at 18:00.

The Esraj is an Indian stringed instrument that appeared about 300 years ago in India. It is found in North India, primarily Punjab, where it is used in Sikh music and Hindustani classical compositions, as well as in West Bengal. 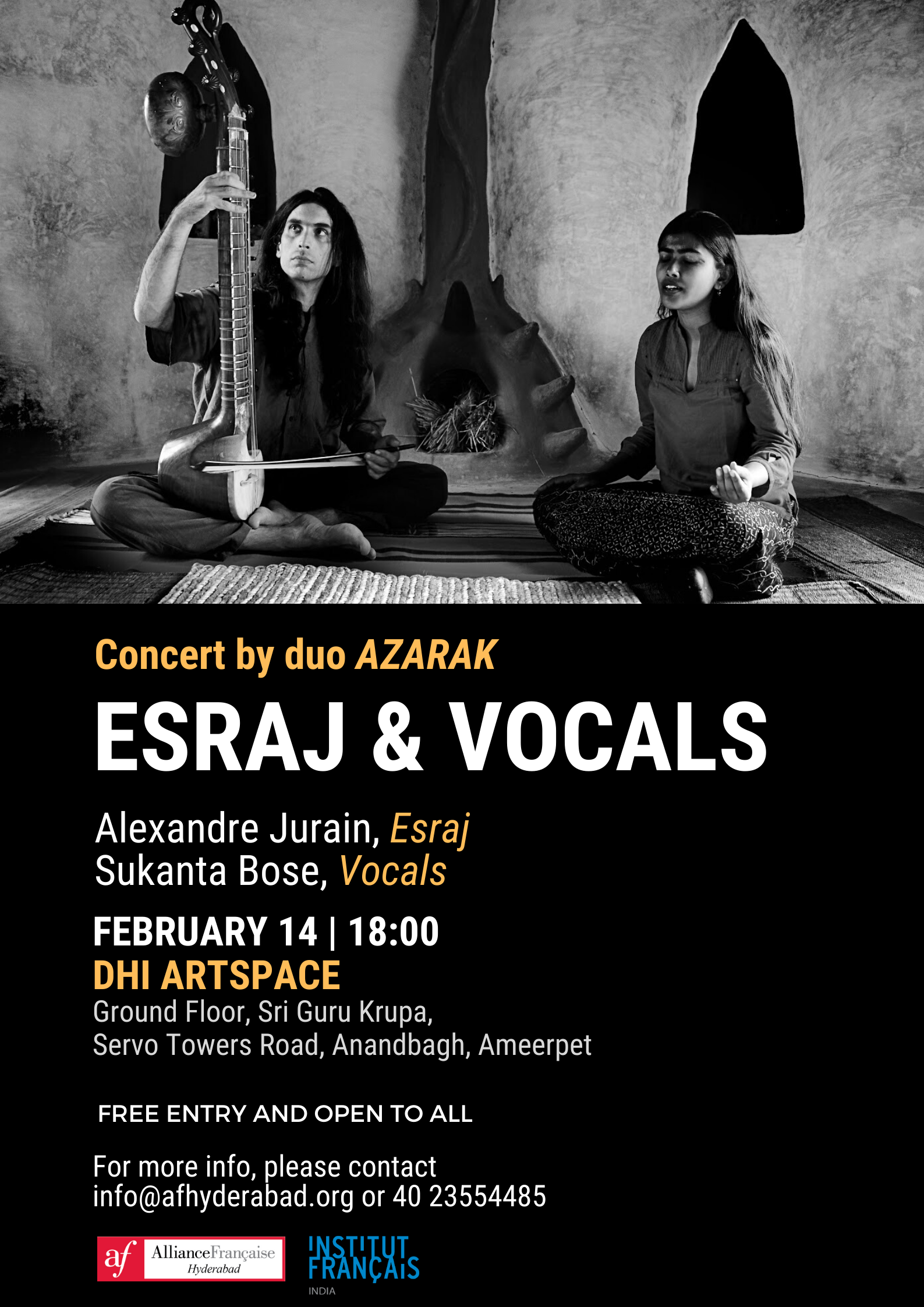 About Alexandre Jurain
Alexandre was born in a Champagne village surrounded by forests and ponds. Passionate about nature and music, he learns the piano, discovers jazz, gets drunk listening to Bach, John Coltrane, Keith Jarreth, Magma, Bartok and Stravinsky. Increasingly interested in Indian music, he arrived in Santiniketan at the end of 2000 and met Abir Singh, a fantastic musician playing one of the rarest stringed instruments in the world, the esraj.
Abir Singh’s musical world, and the expressive possibilities of the esraj, with its sounds ranging from soft to rough and caressing to sharp, fascinated Alexander who became his student. This encounter, which has revolutionized his life, is followed by the meeting, also capital, of Sukanta. The one who will become his companion, in life and in music.

About Sukanta Bose
Sukanta was born in Chandernagor, West Bengal. Her parents, passionate singers, introduced her from a very young age to Indian classical music and to the interpretation of Rabindra Sangeet, a popular repertoire of songs composed by the poet Rabindranath Tagore.
While studying painting at the University of Santiniketan, created by Tagore in the early 20th century, Sukanta took singing lessons from two masters, Vikram Singh and Mohan Singh.
Her painting was already singing nature. Her voice was found in Alexander’s compositions, coloured by the same love of the Earth.

For this concert, Alexandre and Sukanta will perform Alexandre’s compositions in their duo called AZARAK.

About Azarak
AZARAK, it’s a thousand leaf love story. First of all that of Sukanta Bose, then a student in Kala Bhavan, the fine arts of Santiniketan, the city of Bengal imagined by the poet and polymath Rabindranath Tagore and of Alexandre Jurain, a French musician, nomad and nature-lover. They joined forces in 2002 and since then have been working together to build a world that would be a continuation of the work of creative Nature. In the same year, another essential encounter took place: that of Alexandre with the classical Hindustani tradition and more particularly with the Esraj, a rare instrument with strings rubbed together and with a bewitching sound. For this, the novice needed a master of music, immediately found in the figure of Sri Abir Singh Khangura, who has been teaching him for sixteen years the secrets of his art in Santiniketan.
Now, our two companions share their lives between France and Bengal and weave their art as the days go by. Alexandre’s compositions sing of the love of the Earth, life by the rivers and fire, under the trees and the wind.
Above all, they express the very personal vision of an ideal world, an ideal humanity, with a Man who would be between the Indian, the European, and the Tribal. The Indian Man, with his spiritual and endless search for Unity with the Whole. The European Man, with his will to always push further and further the limits of the Known, to explore all possible fields, to always look for new ways to express himself and to explain the world. The Tribal Man, with his simple but powerful connection.
With Nature, his environment, his society, his deep relationship with the Life around him and with his own life, his possession of a true Humanity. The language of Azarak is an imaginary language, which dreams of itself the voice of Nature.
As for the voice of Sukanta, celestial, it detaches itself from the flights of the Esraj, to invite the listener to this dreamlike journey. Sukanta, also a painter, creates paintings embroidering on these imaginary stories.
Their very personal repertoire is thus at the confluence of Western and Indian classical music, with Celtic or tribal reminiscences, and opens up to a wandering in a primeval world, honouring nature as the only goddess.