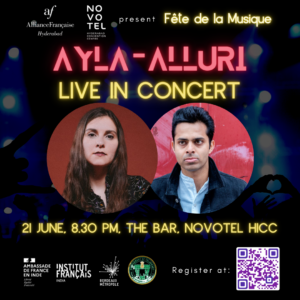 Music expresses that which cannot be said, and on which, it is impossible to be silent. -Victor HUGO

For France, since 1982, June the 21st is not just the summer solstice but also the day to savour music in all its forms – La Fête de la Musique . For 40 years, Fête de la Musique has been a confluence of exponents and lovers of different genres of music, not just in France, but across the globe. Also christened World Music Day, it celebrates a common, unfettered, barrierless love for music. To celebrate the 40th anniversary of FDLM, Alliance Française of Hyderabad has furthered a very interesting collaboration between India and France. Read on to know more…

How often do you see the musical journeys of two rockers from two different parts of the world chart a similar path? Not very often, right? But coming Tuesday, the 21st of June, on the 40th anniversary of Fête de la Musique (World Music Day), you are in for a treat. You get to savour not only the music of the Hyderabadi (Indian) rocker Alluri and Bordelaise (French) rocker Ayla , but also get a sneak peak into their musical journeys.
Ayla:

Istanbul turned out to be a turning point in the career of  French musician Ayla Millepied Sen. Ayla is a singer-songwriter from Bordeaux, who records, discovers and enjoys experimenting and juggling tunes that are as surprising as they are explosive. Ayla refuses to limit herself, whether in experimenting with languages, style or even collaborating with the Turkish Psychedelic Rock legend, Murat Ertel. She successfully sublimates the encounter between French music and Anatolian Psychedelic Pop Rock.
Alluri: 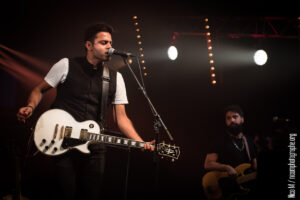 For last year’s FDLM, Alliance Française of Hyderabad piloted a joint interview of Ayla and Alluri on BoxoutFM and the collaboration didn’t stop there. Ayla and Alluri have gone on to make music together and are coming to you, live, this time, in the City of Pearls, under the partnership between Alliance Française of Hyderabad and Novotel Hyderabad Convention Centre. Catch them belt out some of their best individual tracks along with the collaborative project at
AYLA-ALLURI LIVE IN CONCERT
on 21 June 2022
at 8.30 pm
at The Bar, Novotel HICC, Hitec City, Hyderabad.
Free event | Open to all | Register at https://forms.gle/oh77BVnXXmE1xSDq5

Event in collaboration with the French Embassy in India, the French Institute in India, Bordeaux Metropole, Rock School Barbey and Government of Telangana.

For regular updates of all our events and activities, follow us on: 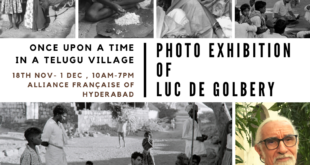 ONCE UPON A TIME IN A TELUGU VILLAGE