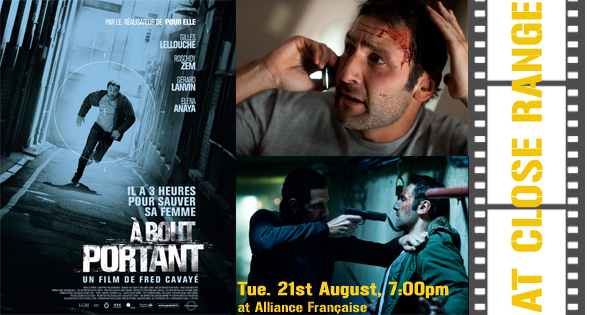 Synopsis
Produced by Cyril Colbeau-Justin and Jean-Baptiste Dupont, Point Blank also stars Roschdy Zem, Gerard Lanvin and Elena Anaya. Gilles Lellouche plays Samuel, a nurse working at a hospital when his pregnant wife (Anaya) is kidnapped before his very eyes. Knocked unconscious, he comes to and discovers that a dangerous criminal named Sartet (Zem) is responsible, and if he’s ever to see his wife again, he must do Sartet’s bidding. Samuel quickly finds himself pitted against rival gangsters and trigger-happy police in a deadly race to save the lives of his wife and unborn child.

Plot
Everything seems to be perfect in Samuel and Nadia’s life: he is soon to become a paramedic, while she is expecting their first child. But their world collapses when she is kidnapped in front of Samuel, who cannot do anything to prevent the worst. When he wakes up, his phone rings: he has three hours to get a man under police surveillance out of the hospital where he works. His destiny, and the destiny of his wife and their child is now linked to Sartet’s, a figure of bandidtry wanted by the police. If he wants to be reunited with his wife, he has to be quick.

This nervous and effective thriller mixes suspense and good twists. This chase in the heart of Paris keeps the spectators at the edge of their seats.

This is the second taut thriller from writer-director Fred Cavayé following Pour elle (Anything For Her, 2008). That was remade in Hollywood as The Next Three Days with Russell Crowe.

The screening will be followed by a debate to exchange our points of view and discuss topics related to the film. Free and open to all.