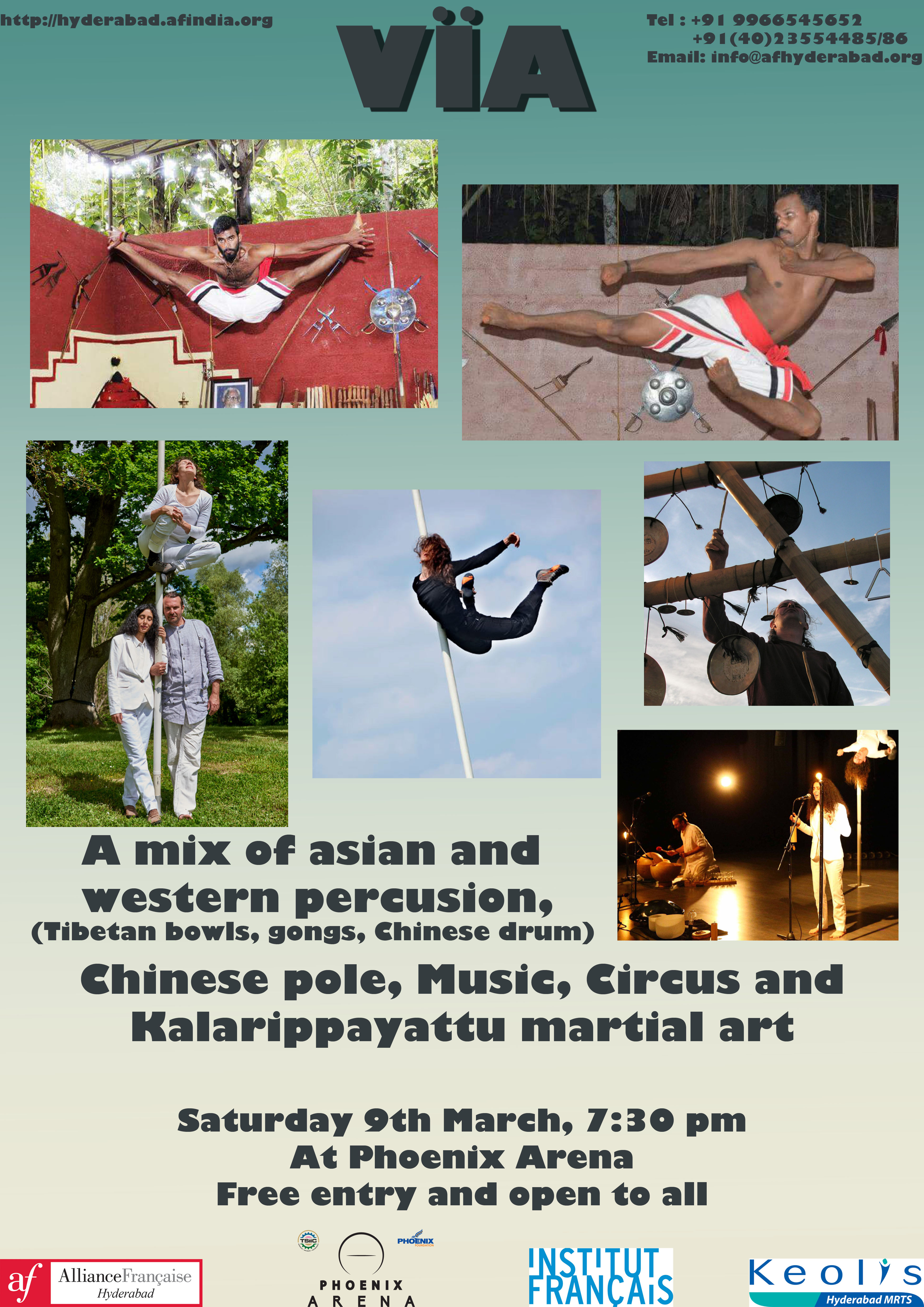 Chinese Pole … Circus … Music … Dance … Percussion … Kalaripayattu …
Via is a live musical sheet which adapts to the interpretation of the moment,to be receptive and responsive to perform the pieces according to the present time.
Places, audience, climate, bodies of the artists are living and moving materials. Being in harmony with all these elements is a delicate work which enables to create a true connection with the audience. The latter is then led to listen and watch carefully, to move closer, to arouse their senses until they possibly reach the limits of the return to themselves and to the world.
Thus, despite its written shape, each performance of Via is unique and living.
Via is a mix of Asian and western percussion, Chinese pole, Kalarippayattu martial arts, dance, circus and song, performed by French and Indian artists.
A MUSIC WHICH BRINGS PEOPLE CLOSER
Fatima sings with the languages of the world, inspired by traditional melodies, her voice mingles with instrumental sounds from many countries. The sound universe mainly consists of 3 axes of research mixing the voice with 3 sets of percussion.
The link with nature. Listening to natural elements like water or wind with the use of instruments such as water drums,Aqua phone or harmonic futes or materials like wood, crystal, bamboo, metal …
Jerôme Cury … A spiritual quest. Crystal or Tibetan bowls, gongs, sanzas are an invitation to travel, to meditation. They initiate the audience into a deep listening and an inside quest. The relation to trance. It is bound to repetitive rhythms and the choice of percussion instruments such as the sabbar, the bendir or the Chinese drum. The two musicians are completely part of the scenography, move along, move apart, meet again. The music and the bodies constantly merge into an intimate ballet.
A CIRCUS WHICH BRINGS PEOPLE CLOSER
Ode Rosset dances on the Chinese pole, she challenges weightlessness and fear of heights. The circus allows the public to give in to their last resistance so that they can be carried by Via, by the way which ties everyone to a piece of earth and dust.
In Via, all the artists share an equal place on stage. Concert or circus performance? Everyone is free to see what they want. One could even close their eyes and be carried away …
“The Kalaripayatt, a very old martial art from Kerala, South India. It may be the ancestor of all martial arts, which allows to develop strong physical” abilities (power, fexibility and agility). For several years, Kishor C.K. has been the national champion of kalaripayattu. He learn from KJV kalari of Puthuppaly with Baiju Varguese Gurukal .
Kishor went to France for 3 months to understand more deeply the European arts. He likes to combines the traditional movements of this martial art Kalaripayattu with his own choreographic gesture, which he calls “fusion”.
Subheesh PB was the champion of kalaripayattu for a long time before becoming an Ayurvedic therapist, and Kallari teacher. He practices in the KJV kalari of Puthuppaly where he learned from his Master Baiju Varghese Gurukal.
Passionate and devoted, he has acquired and refned a great knowledge of the body and kalarippayatt art.
Curious and perfectionist, he is looking for the perfect gesture. Very interested in the proposal to integrate the creation “Via India”, he has seen in this project an opportunity to enlarge his knowledge.
#dance #art #Chinese #Kalaripayattu #TibetianBowl #percussion #gongs #music #French #Indian #Kerala #ChinesePole #International #Francophonie #Culture
For more information :