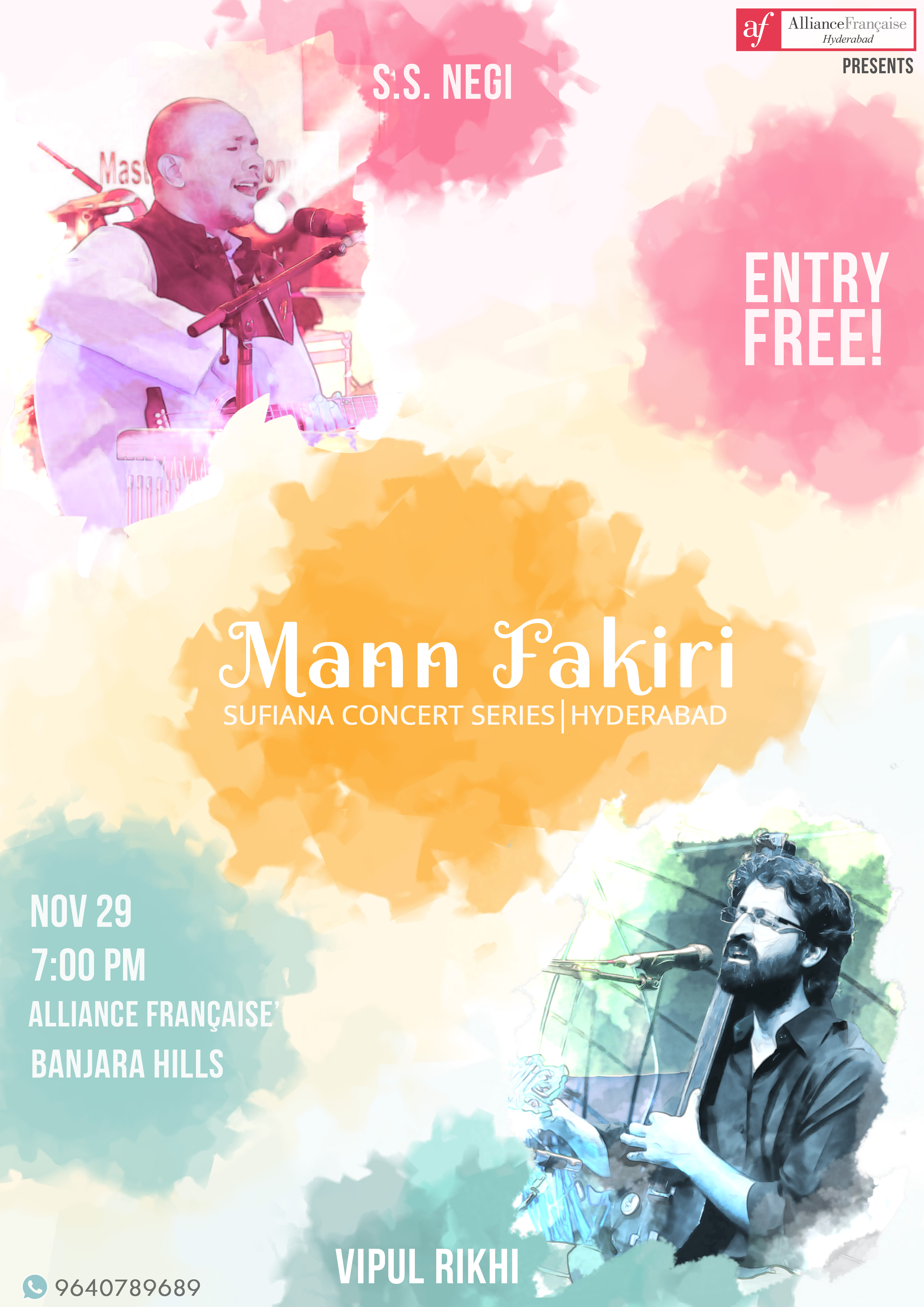 Man Fakiri – Sufiana Concert Series is a week long music festival which will take place in Hyderabad from 25 to 29th November 2017 at three different venues, viz. Shilparamam, Lamakaan and Alliance Française. The festival has been conceptualized to promote peace and harmony keeping in mind the traditions of Sufism, Bhakti movement and other similar oral traditions of India. S. S. Negi from Hyderbad and Vipul Rikhi from Bangalore will collaborate with other accompanying artists to explore the traditions of Bhakti movement, Sufism, Baul, etc. through poetry and music. The festival is expected to travel to other cities in the coming days. Following is the brief profile of the artists participating in the festival.

— Free entrance for all —

S. S. Negi teaches at the Department of Hispanic Studies, The English and Foreign Languages University, Hyderabad. A self-trained singer-songwriter, he is deeply influenced by the folk, Sufism, Bhakti traditions and classical music of India and various other musical expressions. He founded the band Indian Folks in 2012 and worked with the band as vocalist-cum-rhythm guitarist fusing the Indian folk music with Indian classical and western soft rock. Over the last few years, Negi has performed in different parts of the country and abroad as well. His music received a lot of appreciation at the Delhi International Arts Festival, Delhi in November 2016 and at the Nazariya International Women’s Film Festival, Hyderabad in April 2017. He released a studio album Safar in October 2016 (with seven original numbers in Hindi and Spanish).

Negi has recently returned from Latin America where he had been invited as an academic-cum-artist to participate in the International Summit (16 – 19 September 2017) in Caracas, Venezuela. During this trip, he performed at various places including the National Radio and Television of Venezuela and recorded an original composition with Venezuelan musicians as well.

Vipul Rikhi
Vipul Rikhi lives in Bangalore and writes, translates, sings, plays and performs. A poet, fiction writer, translator and singer, his current work with Kabir Project includes extensive writings on and translations of a wide range of mystic poetry, as well as the creation of a vast digital archive of Bhakti, Sufi and Baul music called Ajab Shahar. In the course of these journeys, he developed a deep love for singing mystic poetry in the folk music traditions. In his performances, he likes to bring equal emphasis to the poetry and its insights as to the sheer beauty of the folk tunes.

He was a Fellow for Literature at the Akademie Schloss Solitude in Germany in 2010-11, and is the author of a novel, 2012 Nights, and collections of poetry and short stories.

He has released a studio album Man Fakiri, a collection of songs by various Sufi and Bhakti poets like Kabir, Sattar Das, Gorakhnath, etc.