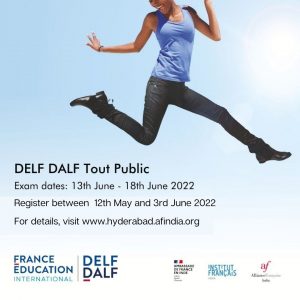 What is DELF- DALF?
Created in 1985, the DELF (French Language Study Diploma) and the DALF (Advanced French language Diploma) are the first French as a foreign language diploma to have international value. These diplomas have been thought at a European level (European Council) and the French Ministry of National Education officially issues them. They have already been adopted in nearly 120 countries as French language reference examinations.

Why appear for this exam?

What are the levels of competencies in French?

The Delf and Dalf certificates are harmonized with the Common European Framework of Reference for languages from the Council of Europe. There are six certificates and each certificate corresponds to one of the six levels

Who can register?
Registration is open to everybody (except French nationals). There is no pre-requisite for registration and no specific training is required.
However, please note that it is an advantage to have studied French with an approach and a textbook compatible with the DELF/DALF philosophy and appear for the corresponding level.

How to register for the exams?